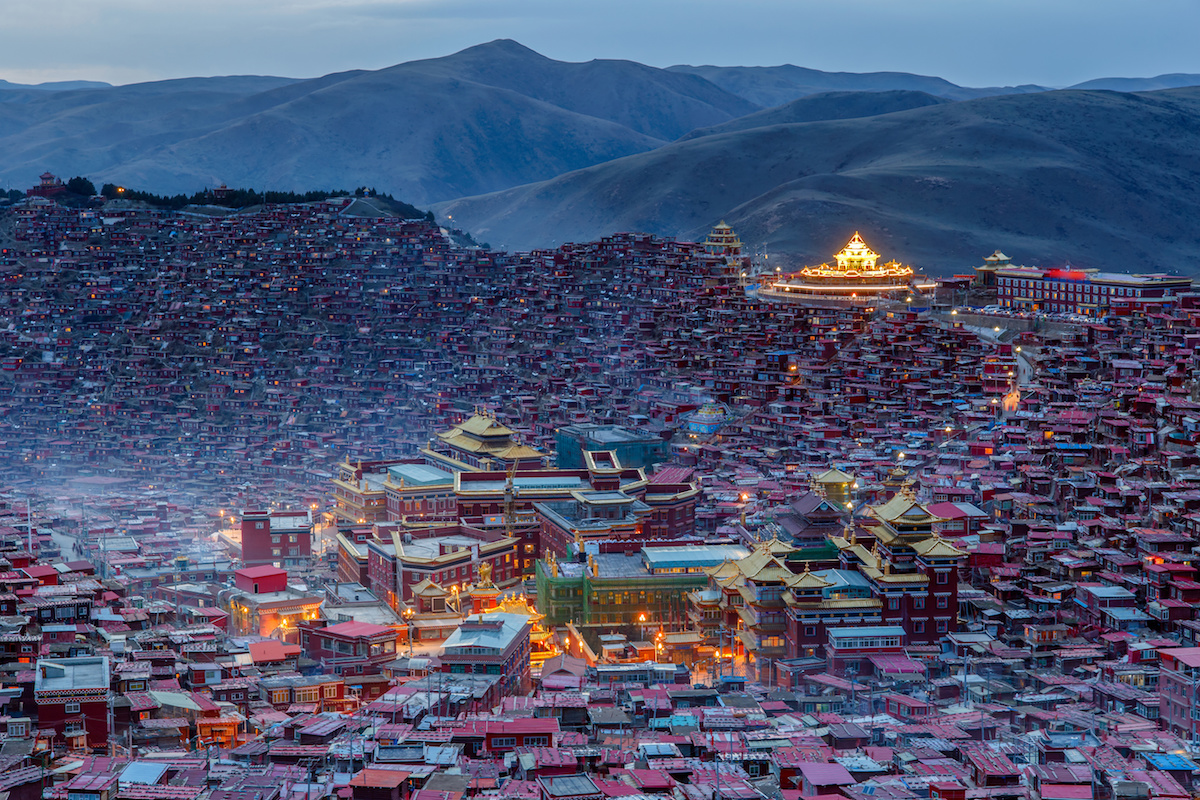 The Chinese government has ordered the expulsion of half of the population of Larung Gar, one of the world’s largest and most influential Tibetan Buddhist institutes. According to an official government order, the 10,000
population is to be reduced to 5,000 by September 2017. The demolition of dwellings began on 20 July 2016.

However, in Janaury 2017, Chinese authorities called for demolitions and evictions to be completed by March 2017.

The population reduction is part of a strategy by the Chinese authorities to place the Institute under government control and ensure it conforms to Party policy. The strategy includes increased surveillance, “ideological guidance”
and the creation of management committees led by government officials.

Expulsions are also taking place at Yachen Gar, another large monastic institution in Sichuan province. 1,000 nuns have been forced to return to their homes and told they cannot join any other religious institutions.

Take action calling on the Chinese government to immediately halt the demolition and expulsions at the Larung Gar Buddhist Institute. Write to the Chinese authorities; write to your MP; and more.

1. Write to the Chinese authorities

Larung Gar demolitionWrite to the Chinese authorities listed below, calling on the Chinese government to:

► Stop the expulsion of residents and students at both Larung Gar and Yachen Gar (also in Sichuan) and allow those who have been expelled to return.

► Allow all students and residents at Larung Gar and Yachen Gar to freely practice their religion and to run their own affairs without government interference.

► Allow an immediate diplomatic visit with unrestricted access to Tibet, including Larung Gar and Yachen Gar, and urge dates be agreed for a visit to China and Tibet from the UN High Commissioner for Human Rights
as agreed during the UN Universal Periodic Review of China in 2013.

► Respect religious freedom at Larung Gar and across Tibet, as guaranteed under Article 36 of the Chinese Constitution and Article 18 of the Universal Declaration of Human Rights.

Article 36 of the Chinese Constitution states, “Citizens of the People’s Republic of China enjoy freedom of religious belief.”

Article 18 of the Universal Declaration of Human Rights states, “Everyone has the right to freedom of thought, conscience and religion… either alone or in community with others, and … to manifest his religion or belief
in teaching, practice, worship and observance.”

Note: Put “For the attention of Ambassador Liu Xiaoming” in the subject line. If these emails bounce please send a letter. Note: the embassy-listed address ambassador@chinese-embassy.org.uk is currently refusing emails.

Outside the UK: check the Chinese government’s webpage listing embassies for contact details of your nearest ambassador and embassy.

Inform your MP of the situation at Larung Gar and Yachen Gar and call for him/her to:

► Press the Foreign Secretary to raise the issue of Larung Gar, Yachen Gar and religious repression in Tibet with the Chinese government.

► Urge the UK government to make a public statement expressing concern over the ongoing situation at Larung Gar and call on China to respect the Tibetans’ right to religious freedom.

To find your MP’s contact details: go to www.parliament.uk or send a message directly via www.writetothem.com.

Outside the UK: Please write to your parliamentary representative urging your government raises the issue with China.

Note: Letters/emails in your own words are most effective, though please feel free to use the sample letter below.

Dear [Name of your MP]

I am writing to ask you to raise a case of religious repression in Tibet with the Foreign Secretary.

Last year, the Chinese government began demolition work at Larung Gar, one of the world’s largest and most influential Tibetan Buddhist institutes. Thousands of Tibetan students have already been expelled and many
of their dwellings demolished. China aims to reduce the population by half, to 5,000, by September 2017, possibly even earlier.

As well as the destruction of dwellings and expulsion of residents, the authorities are increasing surveillance, implementing entry screening procedures and forming new management committees to be led by a majority
of government officials.

Another Buddhist Institute in Sichuan, Yachen Gar is also facing a severe crackdown. 1,000 nuns are reported to have been expelled and told they are not allowed to join any other religious institutions.

All of this interference in Tibetan Buddhist affairs is counter to China’s own Constitution and the Universal Declaration of Human Rights, both of which guarantee religious freedom for all.

Please ask the Foreign Secretary to raise this as a matter of urgency with his Chinese counterparts. Also, please call on the Foreign Secretary to make a public statement calling for an immediate halt to the demolition work
at Larung Gar, an end to the expulsions at both Larung Gar and Yachen Gar, for all those expelled to be allowed to return, for the residents of the institutes to be allowed to run their own affairs without government
interference, and for all Tibetans to be allowed to freely practice their religion.

Please send copies of any replies you receive to Tibet Society – email advocacy@tibetsociety.com or post to Tibet Society, 2 Baltic Place, London N1 5AQ – as this helps us to monitor the government’s actions.

► Send an online message to your Foreign Secretary via Students for a Free Tibet. www.standwithlarunggar.org (go to ‘Action’ at bottom of page.) 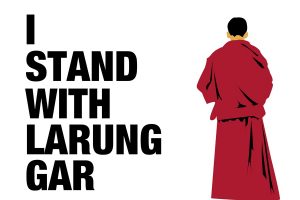 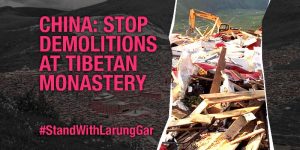 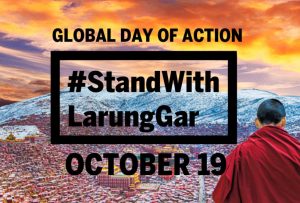 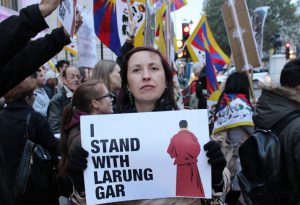 [22 October 2016] On 19 October, approximately 100 Tibetans and Tibet supporters gathered in London to take part in the Global Day of Action in solidarity with Larung Gar. Approximately 20 protests and actions took place in cities across the world, including Dharamsala, New York, Tokyo and Toronto.

Larung Gar protest in LondonThe London protest took place over four hours opposite the Chinese Embassy. At the start, a large banner was unveiled which read “China: Stop Religious Repression in Tibet” with an image of the Larung Gar Buddhist Institute.

Throughout the evening, protestors waved Tibet flags and placards with images of the demolotion at Larung Gar and messages saying “Stop the destruction”. Individuals also held up signs saying “I Stand With Larung Gar”. 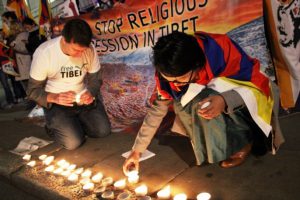 Larung Gar protest in LondonLeaflets were handed to passers-by as the crowd chanted slogans calling for an to China’s brutal policies in Tibet.

Speeches were made by representatives of the organising groups: Free Tibet, Students for a Free Tibet, Tibet Society and Tibetan Community UK.

Larung Gar protest in LondonPrayers were said for all those suffering in Tibet and a minute’s silence was held for the three nuns who committed suicide in protest against China’s interference at Larung Gar.

As night fell candles were lit, before a final round of chanting was held calling on China to stop the demolition at Larung Gar.

China expelling half the population of influential Tibetan Buddhist institute