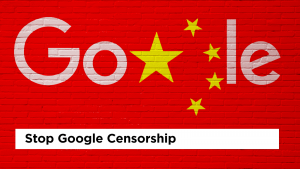 Google have designed, and are planning to launch, a search engine in China that will comply with the Chinese government’s strict censorship laws. This search engine would support efforts by the Chinese authorities to whitewash their brutal human rights record.

Google has been held in high regard globally, not only because of its well known past motto “Don’t be Evil”, but also for the courage it showed in withdrawing from China in 2010, citing the risks of political censorship.

Since Google’s withdrawal from China in 2010, the human rights situation has deteriorated dramatically. Critics of the government are routinely detained and handed lengthy sentences without committing any recognisable crime. Many of them are tortured. Several political prisoners have died in Chinese custody in recent years including Nobel Peace Laureate and Chinese democracy activist Liu Xiaobo in 2017. He was the first Nobel Peace Laureate to die in state custody since the pacifist Carl von Ossietzky who perished at the hands of the Nazis in 1938.

Tibetans and Uyghurs are subject to some of the worst repression on earth, with both populations sealed off from the outside world and both subject to intense surveillance. Tibetans are arrested, beaten and imprisoned for defiant acts as small as blogging about human rights, while over one million Uyghurs are currently being held in vast internment camps.

President Xi Jinping himself has made his intention clear to further extend his government’s control over the internet and the wider control of information in China. By choosing to re-enter China at this time, Google is sending a clear message that censorship can be tolerated while effectively endorsing the Chinese government’s crackdown against human rights.

Such a move would tarnish the reputation that Google has worked so hard to build. Join us in urging Google to cancel the development of Project Dragonfly immediately and reaffirm their longstanding commitment to the free exchange of information and transparency.

Let's tell Google what we think about online censorship