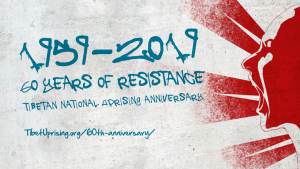 2019 marks numerous significant anniversaries; 30 years since the Tiananmen Square massacre, 25 years since the Rwandan Genocide, 20 years since the 1999 East Timorese crisis, and 60 years since hundreds of thousands of Tibetans took to the streets of Lhasa in what is now marked/commemorated as the Tibetan National Uprising.

As Tibetans and Tibet supporters look back over the 60 long years since that first uprising, and the decades-long military occupation, we see a pattern of Tibetan resistance against Beijing’s colonial rule. A pattern of protest and popular uprisings that continues to exist despite thousands upon thousands of arrests, disappearances, cases of torture, arbitrary detention and forced political indoctrination. Tibetans have continued to non-violently reject China’s rule with fearlessness and daring.

But the human rights situation in Tibet, as elsewhere under China’s rule, is now worse than at any time since 1989. Human Rights Watch recently reported that China’s assault on individual human rights is at its worst level since the Tiananmen Square massacre, and further still Freedom House has ranked Tibet to be the second least free place in the world for the fifth year in row.

However, these peoples’ common desire to stand up against the ever-pervasive restrictions on fundamental rights and freedoms, despite China’s draconian grip, is striking, and reflects the growing global trend to confront abusive governments and push back against decades of oppression.

But the scale of the crisis in Tibet, Uyghur areas and across China, and the Chinese Communist Party’s continued unwillingness to acknowledge the widespread concern, warrants a strong international response to combat the flagrant disregard for fundamental human rights, and China’s violent and systematic assault on Tibetans, Uyghurs and others living under Beijing’s repressive rule.

As the 60 year anniversary of the Tibetan National Uprising approaches, we call on United Nations member states to join together to deliver a resolution on the human rights situation in China, calling for;

China has ridden roughshod over the human and political rights of citizens under its rule for far too long. Despite the decades that have passed since the first Tibetan National Uprising in 1959, this remains an issue that cannot be consigned to history; far from it. With resistance by the Tibetan people so strong and vibrant, it’s time for a response from the international community that matches their courage and conviction.