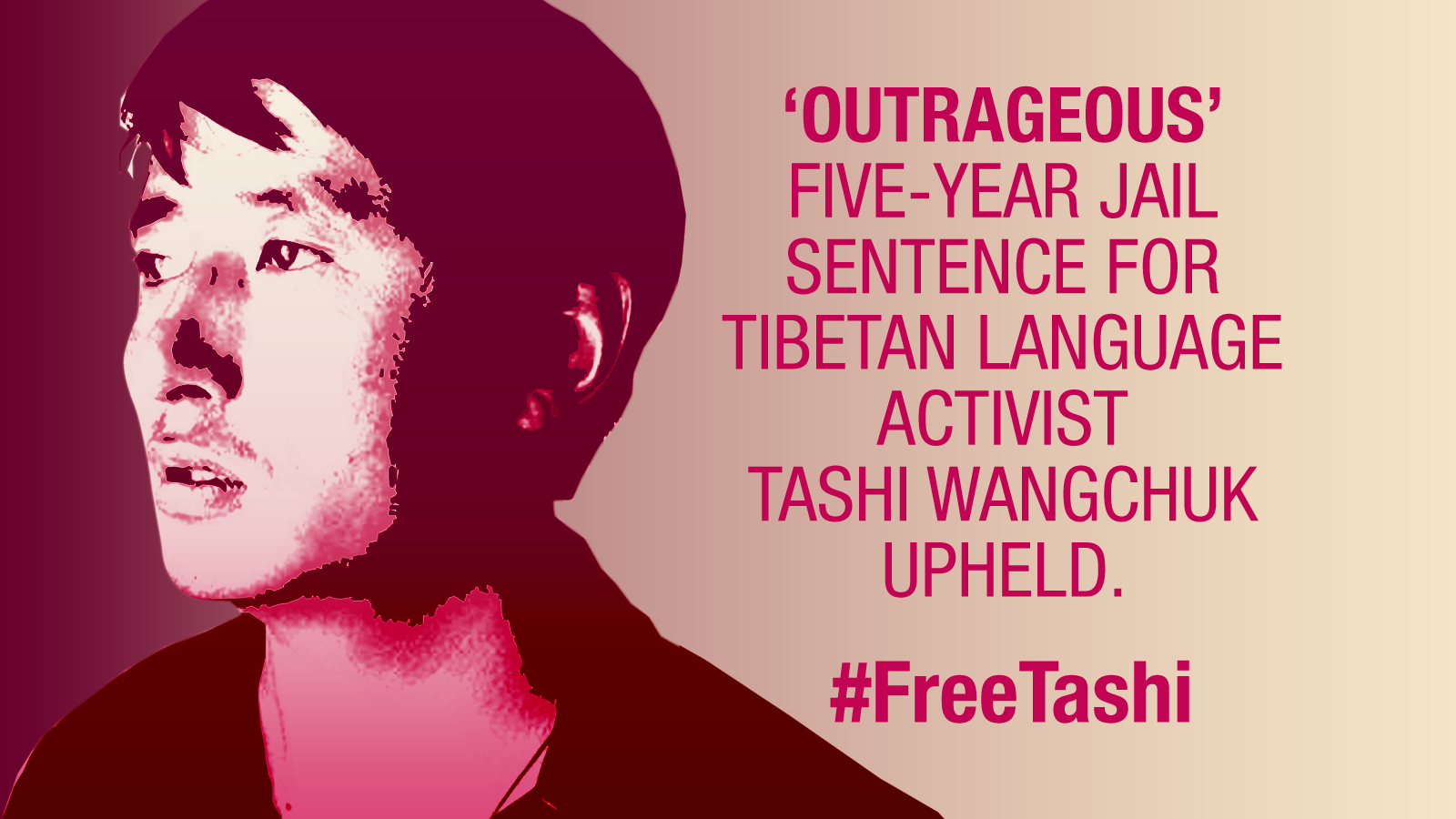 Tibet Groups have reacted in anger today at the news that the five year prison sentence for language rights advocate Tashi Wangchuk was upheld on 13 August. Tashi’s lawyer, Liang Xiaojun tweeted today that “both the argument from Tashi Wangchuk himself and the defending statement from the lawyers were not accepted at all.” [1] Tashi Wangchuk is due to remain in prison until 2021.

“China’s rejection of Tashi Wangchuk’s appeal is a travesty of justice and shows a disdain for the international concern that the case has raised. Our admiration for Tashi’s courage and resilience has reached new heights and we vow to continue pushing for his immediate and unconditional release” said Tenzin Jigdal of International Tibet Network, a network of 170 campaign groups around the world.

Tashi Wangchuk was arrested in January 2016, after carrying out a peaceful campaign to urge the Chinese government to ensure that every Tibetan had access to education in their native Tibetan language. Since his arrest, he has become one of Tibet’s most high-profile prisoners, with Tibetans, Tibet campaigners, human rights organisations, United Nations experts, linguists, and governments all calling for his release.

His case was most recently raised by the United Nations Committee on the Elimination of Racial Discrimination in August, when experts pressed Chinese officials for an explanation for his arrest. The delegation responded by claiming that Tashi Wangchuk was arrested due to acts towards the “succession of the state”.“With China having recently received criticism from the UN Committee on the Elimination of Racial Discrimination, and facing its third Universal Periodic Review in November, Beijing has missed an opportunity to correct a serious injustice” said Eleanor Byrne-Rosengren of Free Tibet. “Instead they’ve made it blatantly clear that they will use the language of national security to suppress any activity they dislike. They seem to be quite comfortable bending the rule of law to suit their own purposes.”

Tashi Wangchuk is a 33-year old Tibetan shopkeeper and language advocate from Kyegundo County in the Kham region of Tibet (Ch: Yushu Tibetan Autonomous Prefecture, Qinghai Province). He became concerned over the lack of Tibetan-language education when local authorities forced local Tibetan language classes to close, leaving his two teenage nieces with no means of learning their native tongue.

He spoke with the New York Times in late 2015 about his attempts to promote the teaching of Tibetan, resulting in a news article and a video documentary on the New York Times website.[2] He insisted that his interview be on the record, despite the tight restrictions on freedom of speech in occupied Tibet.He also emphasised that his language advocacy was non-political and that he did not wish to criticise the Chinese government or call for Tibetan independence. His attempts to persuade the Chinese government to guarantee Tibetan language instruction were conducted through official channels and were focussed on ending the decline of the Tibetan language and the threat this posed to Tibetan culture. Nevertheless, in January 2016 he was arrested and held in secret. While in detention Tashi Wangchuk was isolated from his family and subjected to torture and ill-treatment.Tashi Wangchuk did not stand trial until January 2018, almost two years after his arrest. During his trial, which took place behind closed doors, the New York Times documentary was screened. On 22 May 2018 he was found guilty of “inciting separatism” and sentenced to five years in prison, which included the time he served in arbitrary detention.Tashi Wangchuk is one of a number of Tibetans who have been convicted of “inciting separatism” and other vaguely worded state security laws that the occupying Chinese authorities routinely use against Tibetans. This occurs, despite the fact that the rights for ethnic minorities are guaranteed by Chinese law, including the right to use their own language. [3]

There are an estimated 2,000 Tibetans political prisoners who remain in jail, many of them for exercising their rights to freedom of expression, their cultural and religious rights, sending information about human rights abuses to the outside world and other acts which are protected under international law. [4]

[1]  Liang Xiaojun on Twitter – https://twitter.com/liangxiaojun/status/1032466215036284928?s=21 “The second instance of Tashi Wangchuk’s case was announced in Yushu City Detention Center on 13th August. His family is not allowed to hear the sentence. The adjudication from Qinghai High Court was received recently, and both the argument from Tashi Wangchuk himself and the defending statement from the lawyers were not accepted at all. The second instance has upheld the same sentence. After the trial, Tashi Wangchuk was allowed to meet his family.”

UK & US government statements on death of Tenzin Delek Rinpoche