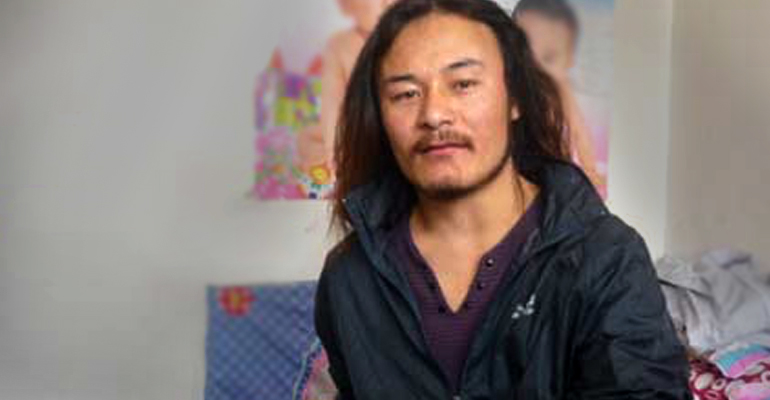 Tibet campaigners received news today [1] of the release of high-profile political prisoner Shokjang (Druklo) [2]. In February 2016, Shokjang was wrongfully sentenced to three years in prison on charges  of “inciting separatism” and “disturbing social stability” [3] following his arrest on 19 March 2015, making him due for release today, 19 March 2018.

Shokjang has a history of activism. As a student of Tibetan literature at the Northwest Nationalities University in Lanzhou, Shokjang organised student protests calling for greater freedom for Tibetans during the mass Tibetan uprisings in March 2008. [4] He was later detained and held arbitrarily for a month for his involvement in the 2008 Tibetan Uprisings, [5] and for publishing a literary magazine that criticized China’s policies [6].

On 17 February 2015, Shokjang was sentenced to three years’ imprisonment and two years’ deprivation of political rights for “inciting separatism”; Shokjang insisted his innocence throughout. According to the Court, Shokjang committed “crimes” through his writings, including an essay on freedom of religion and a blogpost recounting the events of 16 March 2015 when gun-wielding armed police officers conducted a search at his hotel room [7].

Shokjang is a highly regarded Tibetan poet, lyricist, short story writer, and essayist. He is the author of four books: The Courageous Path, The Might of the Pen, For Liberty, I Have No Regrets, [8] and Rangdrol’s Courage. Numerous governments and human rights organisations, including Amnesty International, Pen America, Human Rights in China, have raised his case since his arrest in 2015 [9].

Shokjang’s arrest and false imprisonment expose a larger systemic issue of repression of all aspects of life in Tibet, including the freedom of expression. It also underlines the increasing insecurity of the occupying regime of China. As a result of these crackdowns and Xi Jinping’s increasingly oppressive regime in Tibet and other Chinese-occupied territories, resistance inside Tibet is stronger today than it ever has been.

Gloria Montgomery, Head of Advocacy and Campaigns at Tibet Society in London said:

“Shokjang was wrongfully imprisoned on politically motivated charges and it is utterly deplorable that he was forced to spend the past three years of his life behind bars. His imprisonment is yet another appalling example of the ruthless and repressive tactics used by China in a bid to crush dissent, especially when it comes to those speaking out about China’s policies in Tibet.”

“Shokjang was wrongfully convicted and denied his freedom for three years for simply exerting his right to express views about the treatment of the Tibetan people. We are glad to hear that he is out of prison, but with two years’ deprivation of his political rights he will still not be a free man. Life in Tibet for former political prisoners is extremely difficult, [11] and we call on all governments who have raised Shokjang’s case to press China to immediately lift his deprivation of political rights and refrain from any surveillance, harassment or intimidation.”

[2] ‘Shokjang’ is a pen-name used by Druklo. Further details about his life and case can be found here: http://freetibetanheroes.org/portfolio-items/druklo-pen-name-shokjang/

[4] Video footage, from 16 March 2008, of hundreds of  Tibetan students, including Shokjang, staging a peaceful protest distributing leaflets and calling for an end to the crackdown in Tibet and carrying banners that read “Through Happiness and Sorrow, We Stand United”.https://vimeo.com/19651141. More coverage of the 2008 Uprising can be found at  https://TibetUprising.org

[7] He was also accused of sharing online an extract from the book The Line between Sky and Earth by fellow Tibetan Tragyal, and a news article stating that the Chinese government was willing to talk with His Holiness the Dalai Lama on matters other than Tibetan independence; posting online video footage of Chinese police beating ordinary Chinese people in the street; and storing on his phone six books, including Wang Lixiong’s Sky Burial: The Fate of Tibet. Shokjang wrote a letter of appeal to Qinghai Higher People’s Court, explaining the arbitrary and illegal manner in which he had been detained.

[8] High Peaks Pure Earth English translation of an essay by Tibetan writer and intellectual Shokjang (aka Druklo) originally featured in Shokjang’s book, “For Liberty, I Have No Regrets”. “Should One Follow the Party’s Instructions?” – http://highpeakspureearth.com/2018/should-one-follow-the-partys-instructions-by-shokjang/

[10] International Tibet Network, a global coalition of more than 170 Tibet organisations dedicated to campaigning to end human rights violations in Tibet and restore rights to the Tibetan people. https://TibetNetwork.org/