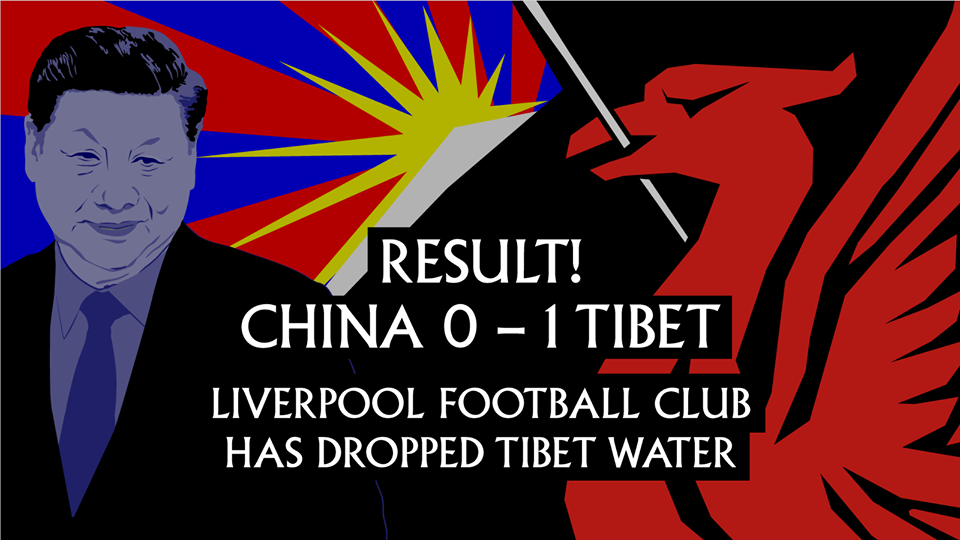 Liverpool FC has caved in to pressure from Tibet campaigners, choosing not to renew its controversial sponsorship deal with Tibet Water Resources Ltd (TWRL).

Over 86,000 people had signed a petition calling on the club to drop the deal, organised by consumer watchdog SumOfUs and supported by 28 Tibetan civil society organisations from around the world, including Tibet Society UK and Free Tibet.

Campaigners called on the club to cancel the deal due to TWRL’s exploitation of the natural resources of Tibet, which is enabled through the help of the Chinese military occupation.

LFC remained silent in the face of the campaign for over a year, including when campaigners drove a mobile billboard in the streets around Anfield highlighting that Tibetans are tortured under Chinese rule.

The club failed to acknowledge any meeting requests from campaigners, led by Tibet Society UK, Free Tibet, the International Tibet Network and SumOfUs, only to quietly drop the campaign at the beginning of the new Premier League season.

Gloria Montgomery, Head of Advocacy and Campaigns at Tibet Society said: “This is a massive victory for Tibetans and the nearly 90,000 people globally who called on Liverpool FC to ditch the deal. Our duty to ensure companies and brands are not complicit in human rights violations is absolutely clear, and Liverpool FC’s directors have now been forced to listen to these demands, including from their own fans, and put the Tibetan people before profits.”

Sondhya Gupta, senior campaigner at SumOfUs, said: “This partnership revealed a dark side to the beautiful game, so – after a year of silence toward our campaign – we’re delighted that LFC executives have finally dropped their deal with Tibet Water. Liverpool fans are famous for their motto “you’ll never walk alone”, expressing solidarity that always made the Tibet Water partnership incompatible with the club’s identity. Clubs like LFC need to remember that they’re accountable to fans and the public, who expect more.”

John Jones, Campaign and Advocacy Manager at Free Tibet said: “We are thrilled to learn that Liverpool FC and Tibet Water have parted ways. A company that exploits the resources of an occupied and oppressed people is not a viable partner, something that Tibetans, Tibet supporters and Liverpool fans have made very clear over the past year. Despite the silence from the club’s directors, the solidarity between Tibetans and Liverpool fans was impossible to ignore. The correct decision has now been taken. The result is a victory for human rights, ethics and the people of Tibet.”

Mandie McKeown, Campaigns Coordinator for the International Tibet Network said: “This is just the result we were looking for. Liverpool FC is one of the largest clubs on the planet, with millions of fans around the world, many of whom have made their opposition to the deal crystal clear. We are delighted that Liverpool FC have ceased accepting sponsorship from a company that exploits the military occupation of Tibet and we hope it brings them further good luck for the 2018/19 season.”

Tibet Society is the world’s first ever Tibet support group. The Society was founded in 1959, within weeks of the flight of the Dalai Lama from Tibet following the uprising against China’s occupation. Today, the organisation continues to work actively for the freedom of the Tibetan people and their right to self-determination.

SumOfUs is a global consumer group that campaigns to hold big corporations accountable. Over 10 million people have taken over 50 million actions worldwide with SumOfUs since it launched.

Free Tibet is a London-based international campaign organisation. Its vision is a free Tibet in which Tibetans are able to determine their own future and the human rights of all are respected. It campaigns for an end to China’s occupation of Tibet and for international recognition of Tibetans’ right to freedom.

International Tibet Network is a coalition of more than 170 Tibet organisations, campaigning for an end to human rights violations in Tibet and restoring rights to the Tibetan people.