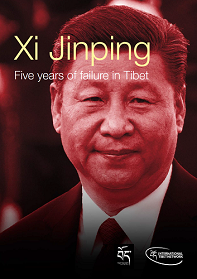 The campaign calls on Liverpool FC’s owner, John W. Henry, to terminate the deal with Tibet Water due to the ethical concerns over dealing with a company operating in occupied Tibet, the scene of some the worst and longest-running human rights abuses in the world (2).

Tibet organisations, including Free Tibet and Tibet Society have written to Liverpool FC’s owner and directors to alert them to the serious situation in Tibet and how their deal with Tibet Wat

The deal, signed on 24 July, makes Tibet Water Liverpool FC’s official regional water partner in China and offers the company a range of promotional and marketing rights. Reports about the deal state that Liverpool FC, one of the world’s biggest football clubs with a growing Asian fan base, will also offer Tibet Water social media support and access to current players and legendary players from the club’s history.

Noticeably absent from the deal are the Tibetan people, who have been living under a harsh military occupation since the Chinese military invaded in 1950. Under China’s occupation, Tibet has become one of the most closed and repressive places on earth (3), with human rights watchdogs recording a range of abuses. Tibetans are arrested and held in detention for “crimes” as small as flying the Tibetan national flag, sharing information about the situation in Tibet to the outside world or simply displaying a picture of their spiritual leader, the Dalai Lama (4).

Under the occupation, a new invasion of Chinese companies has taken place, with Tibet, once a remote country with a pristine environment, now crisscrossed with mines to dig up its natural resources. There has been a boom in water bottling companies arriving in Tibet (5), drawn by the fact that Tibet is the source of some of Asia’s largest rivers, which flow as far as Bangladesh and Vietnam and provide water to roughly a fifth of the world’s population(6). The glaciers on Tibet’s mountain peaks feed into these rivers and are prized by water bottling companies for their purity.

Tibet Groups around the world have expressed concerns that these water bottling, mining and extraction activities in Tibet are only able to take place due to China’s military occupation. Tibetans have been given no say over how their resources are used and have expressed widespread opposition to their natural resources being taken, regularly defying police to carry out environmental protests across Tibet (7).

Since the deal was signed Tibetans and Tibet campaigners in the UK have attended Liverpool matches to hand out information to inform supporters about the implications of Liverpool FC’s links to Tibet’s occupation. Liverpool FC fans have also been in contact with Free Tibet and Tibet Society directly to express their serious concerns about the agreement signed by their club.

“The global response to our campaign shows that when it comes to human rights violations, companies like Liverpool FC and Tibet Water cannot expect business as usual. With so many people now watching, Liverpool FC ‘s directors must decide on which side they stand. Either they follow the growing trend of businesses and brands which respect human rights or they choose to join those who put profits first, by legitimising the Chinese occupation of Tibet and the abuses that help prop it up.”

“While a deal with a company based in Tibet might sound like an attractive and exotic opportunity, the reality for the Tibetan people is very different. Companies like Tibet Water that extract Tibet’s resources cannot be separated from the Chinese government’s brutal occupation and human rights abuses. Liverpool FC’s directors owe it to Tibetans and their fans to learn about the repression that Tibet’s people live under and then reverse course. Terminating this dangerous deal will send a clear signal that Liverpool FC rejects any association with human rights abuses.”

“Tibet Water owes its profits to the repression, torture and denial of basic political freedoms meted out by the Chinese military occupation of Tibet. Liverpool FC is normalising this brutal regime — lending it an air of legitimacy through its deal with Tibet Water. The club should be using its enormous power and wealth to promote basic freedoms and rights across the world, not help deny them.”

The full list of organisations taking part in this campaign are:

Students for a Free Tibet International, UK, India and Japan

Liverpool FC’s press release about the deal can be found here: http://www.liverpoolfc.com/news/announcements/269478-lfc-announces-tibet-water-resources-ltd-partnership
The US-based human rights and democracy organisation Freedom House ranks occupied Tibet as the second worst place in the world for political rights and civil liberties, behind only Syria. Their 2017 report is available at: https://freedomhouse.org/report/freedom-world/2017/tibet See also Amnesty International, Annual report 2016/2017 – The State of the World’s Human Rights: https://www.amnesty.org/en/latest/research/2017/02/amnesty-international-annual-report-201617 and Human Rights Watch, World Report 2017 – China and Tibet:, https://www.hrw.org/world-report/2017/country-chapters/china-and-tibet
The campaign can be accessed through the websites of the participating organisations, and via the International Tibet Network’s website here: https://actions.tibetnetwork.org/tell-liverpool-fc-drop-its-sponsorship-deal-tibet-water
For example, in 20014, Tibetan monk Thardhod Gyaltsen was sentenced to 18 years in prison after being caught in possession of portraits and recordings of the Dalai lama during a raid on his monastery by security forces: http://www.thetibetpost.com/en/news/tibet/3963-china-jails-senior-monk-from-tibets-driru-county-for-18-years
TWRL is one of a number of Chinese water bottling companies operating in Tibet with the backing of the Chinese government. In 2014, under an initiative called “Sharing Tibet’s Water with the world”, the regional government of the Tibet Autonomous Region (TAR) signed contracts with sixteen major companies to expand the water bottling industry in Tibet and, in November 2015, announced a new ten-year plan to expand the industry, with a target of 10 million tonnes of bottled water production by 2025. The expansion – a seventy-fold increase over the capacity in 2014 – is being incentivised with significant tax breaks to companies and a lower extraction fee for water than elsewhere in China.
See, for example: http://www.reuters.com/article/us-climate-rivers-asia/melting-mountains-put-millions-at-risk-in-asia-study-idUSTRE6594TG20100610
For more information on Tibet’s environmental protests, see this report by Tibet Watch: http://www.tibetwatch.org/uploads/2/4/3/4/24348968/environmental_protests_on_the_tibetan_plateau.pdf

For more information about a current Tibet Society’s campaign or to if you would like to arrange an interview, please contact our Head of Advocacy, Gloria Montgomery at