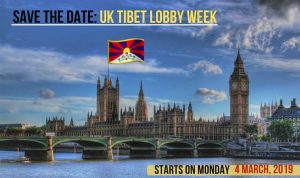 The Tibet Lobby Week is a key opportunity for supporters of Tibet to call for action for Tibet from their elected representatives. It gives supporters the chance to build up their relationship with their members of parliament and introduce them to Tibet, the occupation and the human rights abuses taking place.

This year we are encouraging supporters to raise three issues with their MPs:

We have provided a number of resources to enable supporters to take part in Tibet Lobby Week. They cover everything from finding your MP and securing a meeting with them to talking points and detailed background information to help make your lobbying a success.

BACKGROUND: WHAT IS LOBBY DAY?

Tibet Lobby Day/Week takes place every year around the world. Tibet groups and their supporters meet with their elected representatives and encourage them to take action for Tibet. Tibet Lobby Day generally takes place around 10 March, the anniversary of the 1959 Tibetan Uprising – one of the most significant dates of the year among Tibetans.

On the day, campaigners and supporters gather at their parliaments, senates or government buildings and  attend pre-arranged meetings with their elected representatives.

The meetings allow supporters to brief their representatives about what is happening in Tibet and ask them to take action.