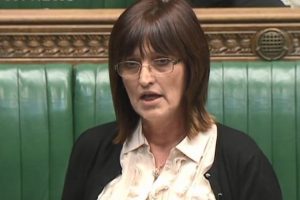 Karen Lee, MP for Lincoln (Labour) and Shadow Fire Minister, raised the human rights situation in Tibet with The Rt Hon Jeremy Hunt, the Secretary of State for Foreign and Commonwealth Affairs of the United Kingdom in the House of Commons on 30 October, saying

“The Human Rights situation in Tibet is deeply worrying. Without transparency, it is difficult to know exactly how many Tibetans have been imprisoned unjustly in China. I therefore asked the government to help facilitate the access of independent observers to Tibet”.

Mr Jeremy Hunt replied, “I do completely share the concerns that she’s raised and that is one of a number of human rights issues that we raise regularly with the Chinese foreign minister and I will continue to do so.”

Karen Lee tweeted the video which attracted messages of support.

Tibet Society Attends Parliamentary Reception to Mark ‘The Future of Tibet, Heartland of Asia’ Exhibition at the Scottish Parliament