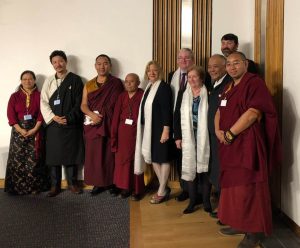 It reception was hosted by Linda Fabiani MSP, Speaker of the Parliament, in conjunction with the Scottish Centre for Himalayan Research.

The chair of the CPGT, Hon Linda Fabiani MSP, welcomed a four-member Tibetan Parliamentary delegation to the Scottish Parliament and expressed her support and that of her Parliamentary colleagues in the Cross Party Group to the issue of Tibet.

The Tibetan delegation, lead by the Deputy Speaker, Acharya Yeshi Phuntsok, are visiting the UK from 4-12 March and will be participating in a range of events to mark the 60th anniversary of the Tibetan National Uprising of 1959. 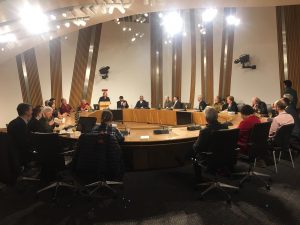 In his address to the Parliamentary reception, Acharya Yeshi Phuntsok called for the continued support of MSPs towards a peaceful resolution of the Tibet issue. The Deputy Speaker highlighted that after 60 years of Chinese occupation, Tibetans inside and outside of Tibet continue to fight tirelessly for their human rights and freedoms. He raised the case of Tibetan language advocate, Tashi Wangchuk, who is currently serving a 5 year prison sentence for simply calling for Tibetan language education in schools.

The exhibition raised awareness about the importance of the Tibetan plateau to the entire planet.  The Tibetan Plateau is widely known as the Third Pole because it contains the largest reserve of fresh water outside the polar regions. Ten of Asia’s largest rivers begin in Tibet, including the Yellow river and Yangtze river in China, the Irrawaddy river in Myanmar, the Ganges, which flows through India and Bangladesh, and the Mekong river, which spans through 6 different countries over the course of almost 5,000 km.

When addressing the gathering, The Representative of the Office of Tibet in London, Mr Sonam Frasi said ‘The future of Tibet to the whole world is far more important than is recognised. Tibetans have preserved and looked after the plateau’s ecology for centuries. Tibetans have observed an ethical preservative approach to the mountains, lakes, rivers, its flora and fauna… [but] over the past 60 year, China has continuously exploited the natural resources of Tibet.”

Tibet needs protecting, not just for Tibetans, but for the environmental health and sustainability of the entire world. Governments must heed the warning or the risk to our planet may be catastrophic 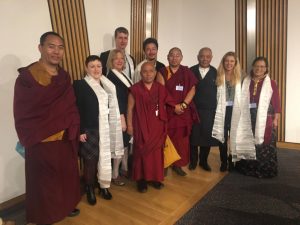