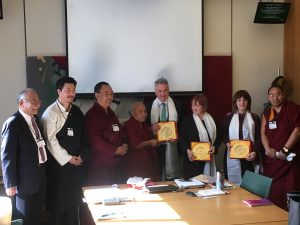 On 11 March, four Tibetan Parliamentarians briefed members of the All-Party Parliamentary Group for Tibet at the Houses of Parliament in Westminster, London.

The meeting was chaired by Tim Loughton MP from the Conservative Party (Co-Chair of the APPGT), Karen Lee MP and Kerry McCarthy MP, both from the Labour Party.

The Tibetan delegation, lead by the Deputy Speaker of the Tibetan Parliament-in-exile, Acharya Yeshi Phuntsok, are visiting the UK from 4-12 March.

During the meeting, the Deputy Speaker spoke about the history of the Tibetan resistance to mark the 60th anniversary since the Tibetan National Uprising of 1959. Acharya Yeshi Phuntsok also stressed the need for continued support for the Tibetan cause, including by encouraging the UK Government to explore new funding opportunities for preservation and promotion of Tibetan language and culture.

The session concluded with an interactive Q&A session. Tibetan Member of Parliament, Mr Sonam Norbu Ratsa also addressed questions regarding the stateless nature of the Tibetan community, notably in Nepal, where they face barriers to school enrolment, employment and even celebrating their cultural traditions. MPs expressed their commitment to raising the issue of stateless Tibetans in the UK Parliament.

The meeting was also attended by Tibet support groups, including Free Tibet, Tibet Society supporters and members of the public. Tibet Society is the Secretariat for the APPGT. 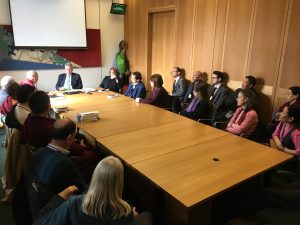 UK & US government statements on death of Tenzin Delek Rinpoche

Lobby your MP to join the Parliamentary group on Tibet!