Tibet Society is dedicated in its work to support Tibetan democracy and to offer opportunities for Tibetans to advocate directly to UK policy-makers and parliamentarians. To further this aim, the Society formed an innovative Parliamentary Exchange Programme.

Tibet Society has been running the exchange programme since 2007, and in addition to Tibetan MPs visiting Westminster, UK MPs have travelled to Dharamsala to observe the processes of the Tibetan Parliament-in-Exile and forge a stronger understanding between British and Tibetan parliamentarians.

Keep your eyes peeled for the Parliamentary Exchange planned for the early half of 2019!

A cross-party delegation of MPs from the three largest parties in the UK travelled to the seat of the Tibetan Government-in-Exile in Dharamshala, northern India from 26-29 September 2018. 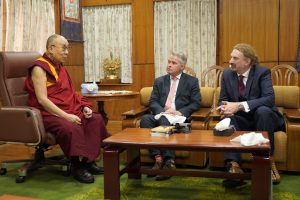 The three delegates also had a session with the Speaker of Tibetan Parliament-in-Exile, Ven Khenpo Sonam Tenphel, as well as a session with Dhardon Sharling, Secretary of the Department of Information and International Relations, who was able to bring them up to date on the situation inside and outside Tibet, especially in relation to the international community whose support is so vital to the Tibetan cause.

The group took the opportunity to meet civil society groups who do so much for the Tibetan cause, and also visited cultural institutions which aim to preserve Tibetan culture, including the Norbulingka Institute, the Library of Tibetan Works and Archives (LTWA) and the Tibet Museum. Such institutions are crucial to document, preserve, research, exhibit and educate Tibetans and non-Tibetans on all matters related to Tibet’s history, culture and present situation.

In 2009, Tibet Society invited four Tibetan MPs to visit Westminster, giving them the chance to learn about British parliamentary processes first hand. In June 2009 Dolma Gyari, Ngawang Lhamo Kanang, Tsetan Norbu and Gyalrong Dawa Tsering formed a delegation from the Tibetan Parliament-in-Exile. As part of our Parliamentary exchange programme the MPs were in the UK to undertake a series of engagements and workshops. The busy schedule included workshops on media skills, devolution, the role of a modern MP, committee work and parliamentary scrutiny, plus observing Prime Minister’s Questions and an evidence session of the Scottish Affairs Committee. Importantly, the delegation also had opportunities to advocate for the Tibetan cause, and did so in meetings at the Foreign Office with the China & Hong Kong Desk and Asia Research Group; at Parliament with members of the Foreign Affairs Committee; with MPs at an All Party Parliamentary Group for Tibet meeting and with the public at the Centre for Reconciliation and Peace. The delegation also met informally with peers such as Baroness Harris of Richmond, Lord Steel and Lord Alton and Chinese democracy activists in Westminster, and met with Tibet Society members at a reception at the Houses of Parliament. A lively question and answer session gave members of the Tibetan community a chance to put their views across to the MPs.-

Tibet Society Attends Parliamentary Reception to Mark ‘The Future of Tibet, Heartland of Asia’ Exhibition at the Scottish Parliament

Lobby your MP to join the Parliamentary group on Tibet!